You are here: Home / Giving Back / Are You Afraid of Sending Balikbayan Boxes in December?

Sending balikbayan boxes in December wasn’t in my plan.

It is a superstitious belief of OFWs that I’ve been hearing as a child. My excitement of opening boxes coming from Canada is off season in December.

And I carried that belief till such time that it is time for me to send balikbayan boxes from Canada.

So where does this notion comes from? Do NOT send balikbayan boxes in December.

There are stories of unfortunate events from my relatives and others; stories passed on from one generation of OFWs to the next. 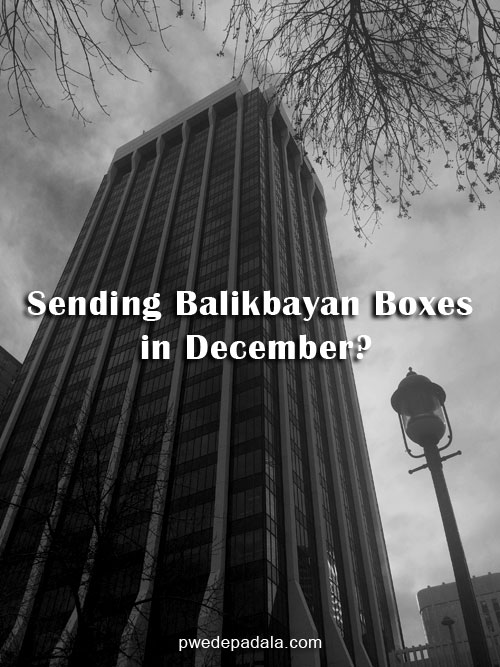 The Story of Unfortunate Boxes

I remember when I was a child, our family received a balikbayan box from a relative in Canada.

By looking at the box we already knew that it was opened somewhere by someone. There was a dent on top. The tape were obviously peeled off and replaced with a different kind. (I sound like a detective of an unsolved box mystery.)

No way can anyone cover up the committed wrongdoing.

The box has been robbed and we reported the incident. My relative probably looked for another forwarding courier. It only happened once. (I don’t want to Jinx it.)

When I came here in Canada. I hear the same terrifying stories and advice.

Do NOT send balikbayan box in December. Someone else might open and get whatever they want from the box.

To Worry or Not: Sending Balikbayan Boxes

I sent the two balikbayan boxes from Calgary in the first week of December. (Always a stubborn; not conforming even to hearsay.)

The boxes probably will arrive in the last week of January or first week of February 2017.

I spent $70.00 CAD for each box; it is the current fee of shipping from Calgary to Manila.

I’ll update this blog post to let you know how things went through. For now I’ll hold on to the invoice and inform my family about the tracking number so they can check the whereabouts of the boxes.

I hope they make it in our home . . . regardless of how long.

(Maybe not more than two months or my family will keep on asking out of excitement. Oh well! I was once that kid worried if something is about to expire.)

Update: My boxes made it to the Philippines. All of them.

Did you experience something unpleasant in sending balikbayan boxes? Some items are stolen or the whole box is missing? Share in the comment.